Scars are areas of the skin where there is obvious residual appearance of an area of healing to the skin after it has been damaged. 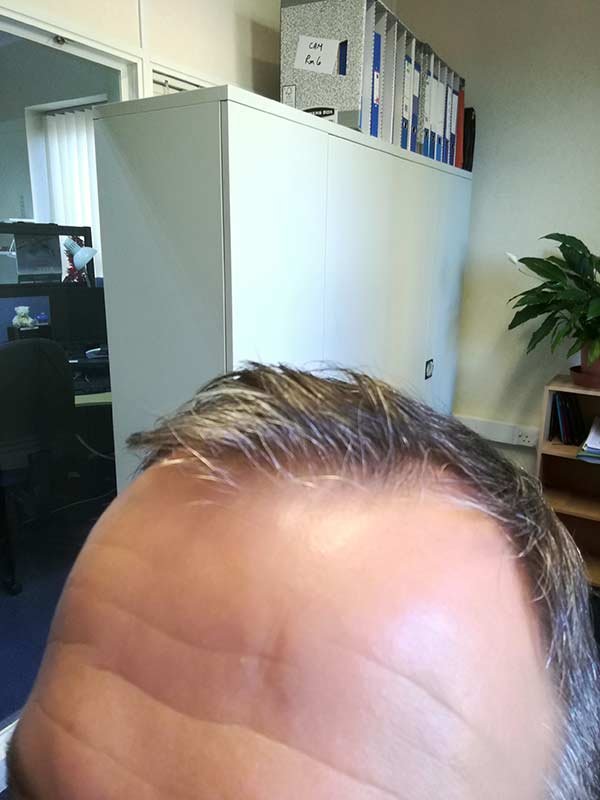 In the picture above – you can see a vertical scar to my forehead (in amongst the wrinkles!) – caused by a tobogganing accident when I was 5.

Scars are due to the skin being breached, with subsequent healing leading to an area that does not look like the rest of the surrounding tissue. They may arise after a burn, skin graft, or an incision (surgical or other means of going through the outer layer, the epidermis and into the dermal layers and beyond).

Primary healing is seen when medical techniques are used to close the break of the skin. This may be by bringing the edges of a wound together by using steristrips (a type of medical ‘sellotape’ with tiny grips that keep the wound edges together), specialized glue, or by stitching with needle and thread.

Scars are more noticeable when they disturb the collagen lines that run in the dermis – these run in set directions, so that on the forehead, when you wrinkle it up you can see a frown (as in the picture !). The collagen fibres, Langer’s lines, run from one side of the forehead, horizontally above the eyebrows. If there is a horizontal cut then the resulting scar is less likely to be obvious than if there is a vertical cut, when the lines of collagen are broken.

The thickness of the skin varies throughout the body, e.g. the heels of most humans are thick and therefore more resistant to be breached as compared with the skin on the cheeks. For wound healing there are many important factors to take into account that will influence the duration of healing and the end result. Examples of factors that influence wound healing include diabetes (type 1 and type 2), the presence of infection (or an increased susceptibility to catch infection), smoking, and vascular disease/ poor perfusion to the area.

Scars may be obvious, e.g. keloid scar occurs when there is an overgrowth of healing tissue – this can produce unsightly healed scars, e.g. ear piercings may give rise to a large bunched scar which can deform the associated ear. More commonly, there may be a raised area and colour change, although it may take up to 1.5 years until the final appearance is reached. This is due to the extent to which pigment cells (melanocytes) are able to come back into the affected area. Their migration may be limited owing to the development of fibrous dense tissue.

Initially in the healing process, there is intense swelling, erythema (reddening) and it may be painful. However, this does not mean that there is an infection present, simply that this is the first stage of healing.  Following this stage, fibrous tissue is produced by specialist cells known as fibroblasts, along with capillary vessels through specialist cells which come to readjust the affected area. Collagen is re-laid and the scar is reshaped, but it may still appear red. Continued reshaping means that the red and raised area, generally speaking, subsides to become flush with the rest of the adjacent skin.

Scars may continue to be raised (hypertrophic scar – this is not the same as a keloid scar, where there is a considerable overgrowth of scar tissue, as mentioned previously). There may be pain, a feeling of numbness/reduced sensation, or increased sensitivity e.g. to touch.

MEDICOLEGAL ASPECTS – the questions to ask

There has to be a causal link established between the events that led to the scar and that this event was due to a breach of duty, with subsequent harm.

If you want further information about this particular topic, or wish to discuss the possibility of bringing a claim for Clinical Negligence - or indeed any other type of injury, please contact the Dutton Gregory Clinical Negligence Team on (01202) 315005, or email k.marden@duttongregory.co.uk

NB This article does not constitute legal advice and should not be relied on as such. No responsibility for the accuracy and/or correctness of the information and commentary set out in the article or for any consequences of relying on it, is assumed or accepted by any member of Dutton Gregory LLP.

Reflections on the decision in Sevilleja and Marex Financial

What is reflective loss in litigation claims? When and how are the claims of shareholders, company...
Read more

Surrogacy and Parental Orders - A Guide for the Modern Family

The needs of families and their composition continues to change, as does the technology to support...
Read more
Twitter Feed
Your choice regarding cookies on this site